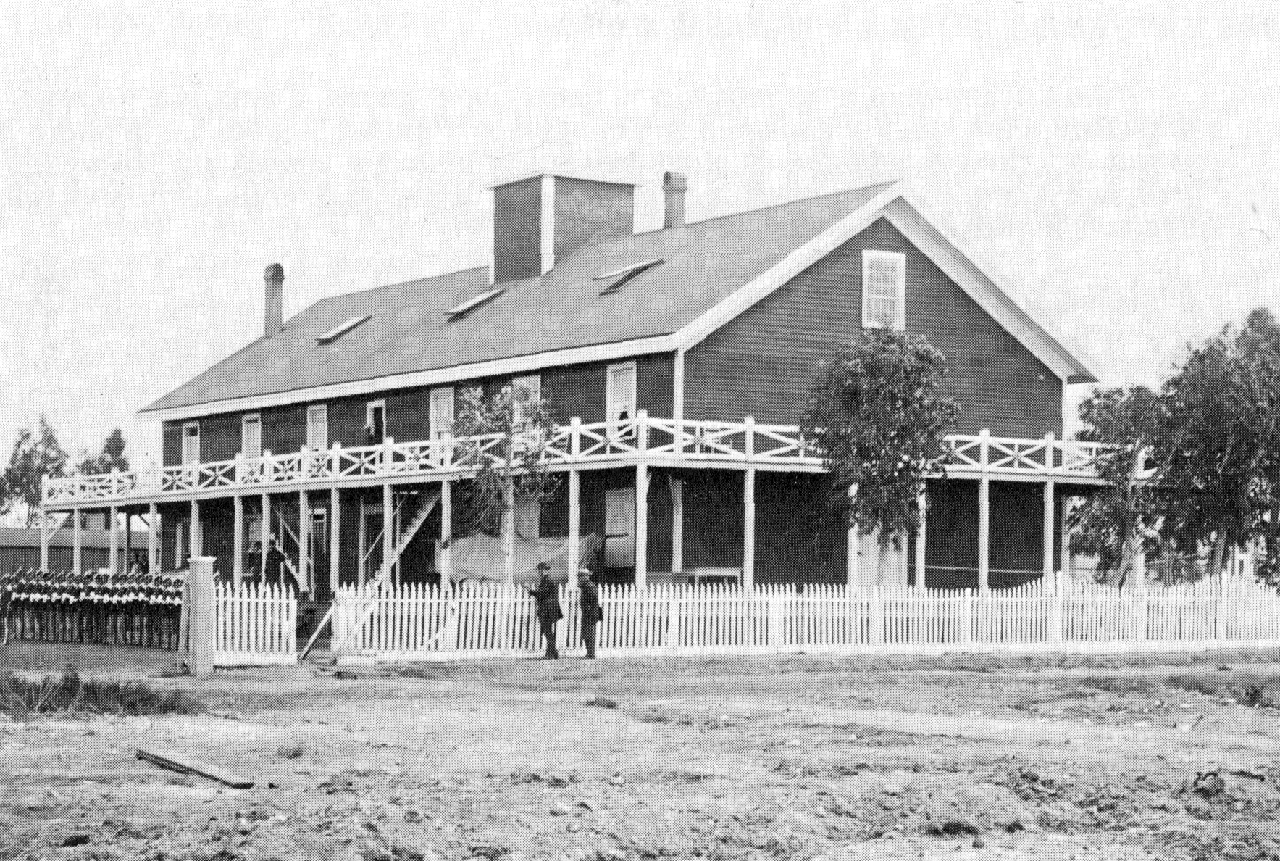 A Methodist prayer meeting with 17 participants was held on the second floor in the U.S. Army barracks located near present day Seaport Village. The meeting was arranged by an elderly lady, Mrs. Case, who had recently moved to San Diego. 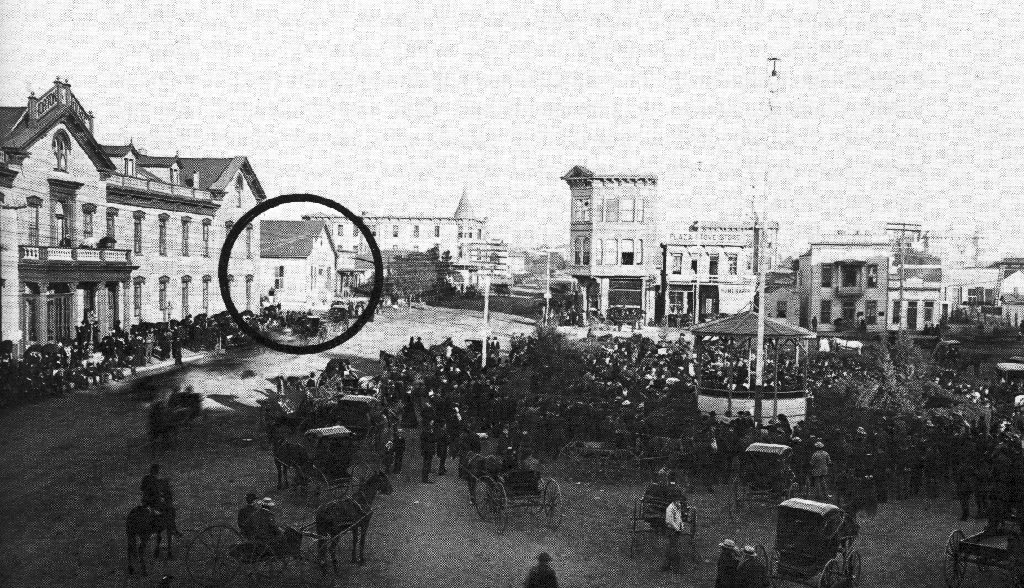 The new congregation bought two lots for $200 on the northeast corner of Broadway and Fourth Ave., across from what is now Horton Plaza. The first church was a white wooden structure that could seat 300 worshipers. 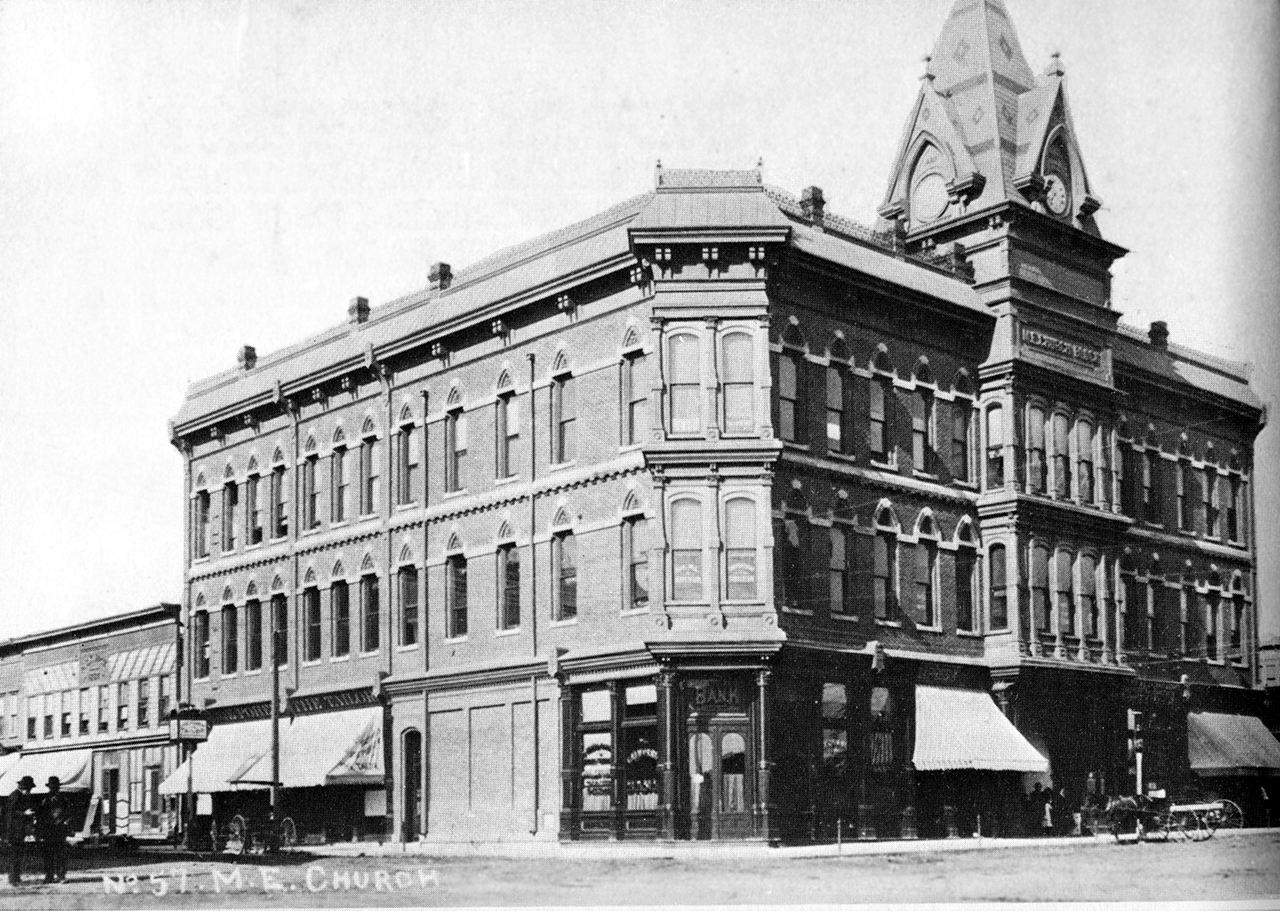 By 1887, church membership had grown to 395. The wooden church became too small and was moved to India St., and a large three-story building, the First Methodist Episcopal Block was built in its place to a cost of $50,000, including a pipe organ. The structure was a combination of church edifice on the second and third floors and income-producing commercial space on the street level. 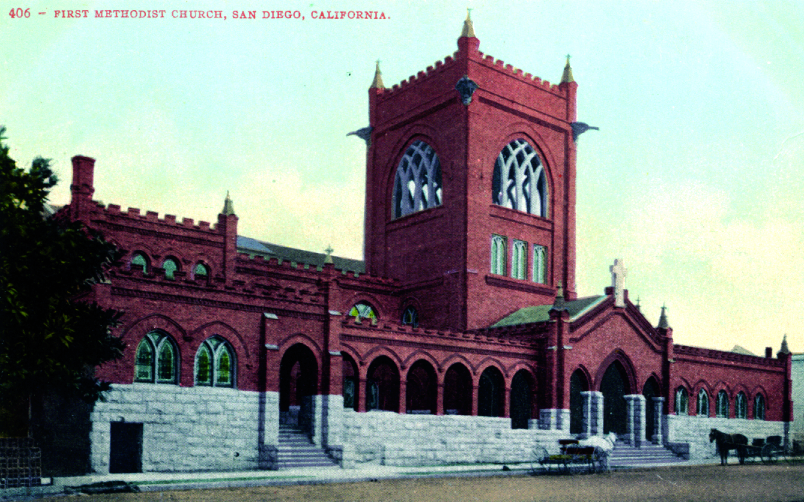 A new church, designed in "Gothic-Revival" style by Irving Gill, was dedicated on May 5, 1907. The auditorium could seat 1,500 people. The bell tower contained 11 cast bells, gifted by Dr. Gaylord Hartupee in 1908, which were moved and eventually installed in our current bell tower. The stone cross positioned on top of the main entrance to the church, was recovered during the move to Mission Valley and can now be seen at the entrance to the Children's Growing Center. 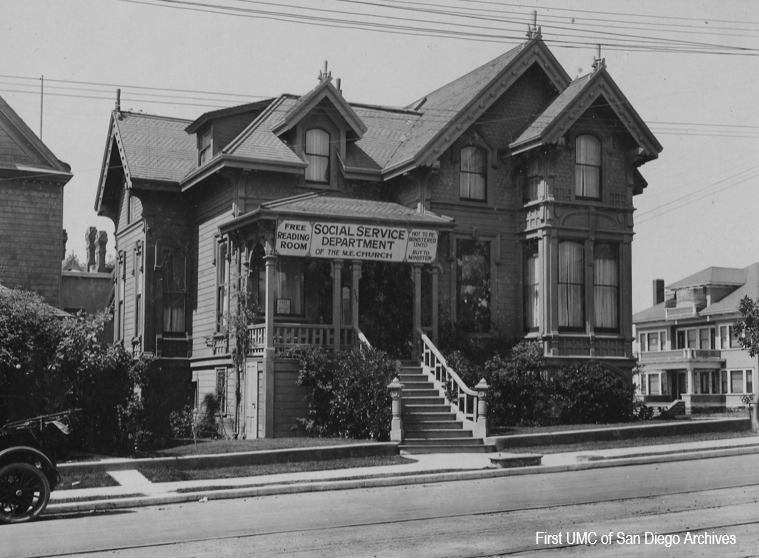 The Social Service Department, one of many ministries, had its headquarters located in a large home and had a sign above the porch indicating that the site offered a free reading room. The exact location of this building is unknown; however, it was most likely nearby the Ninth and C Street church. 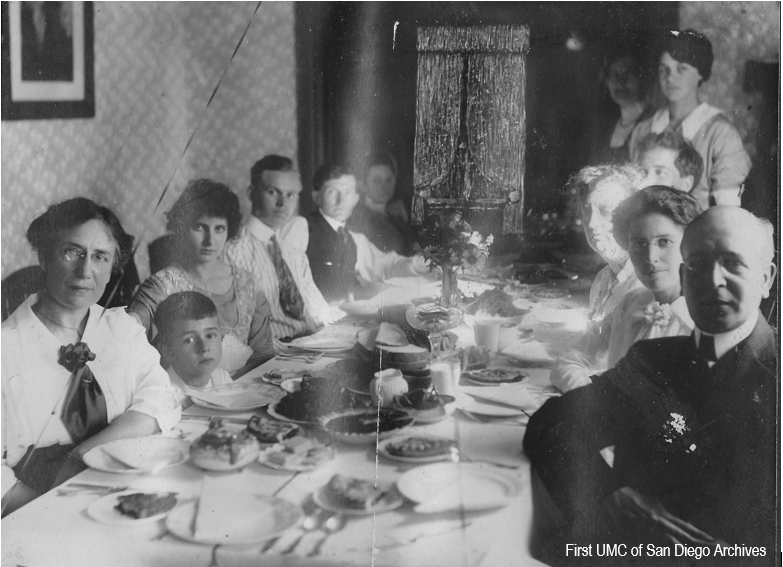 In this photo from November 1916, the Social Service Department workers and residents are gathered to share a Thanksgiving meal. The First M.E. Church of San Diego provided social services for those in need with beds, meals, clothing and medical care. The building housed dorm-style sleeping quarters for men and women, private bedrooms, a clinic, a reading room, a dining room, a reception room,  and a clothing room.

During the WWII, the downtown church was open every day and night, providing fellowship and worship for members and the armed forces.

In the 1950s the congregation was again outgrowing its facilities downtown, where needed repairs to accommodate new earthquake safety regulations and lack of adequate parking had become issues. A location to build a new church was found in the heart of Mission Valley, among nearby dairy farms and corn fields. 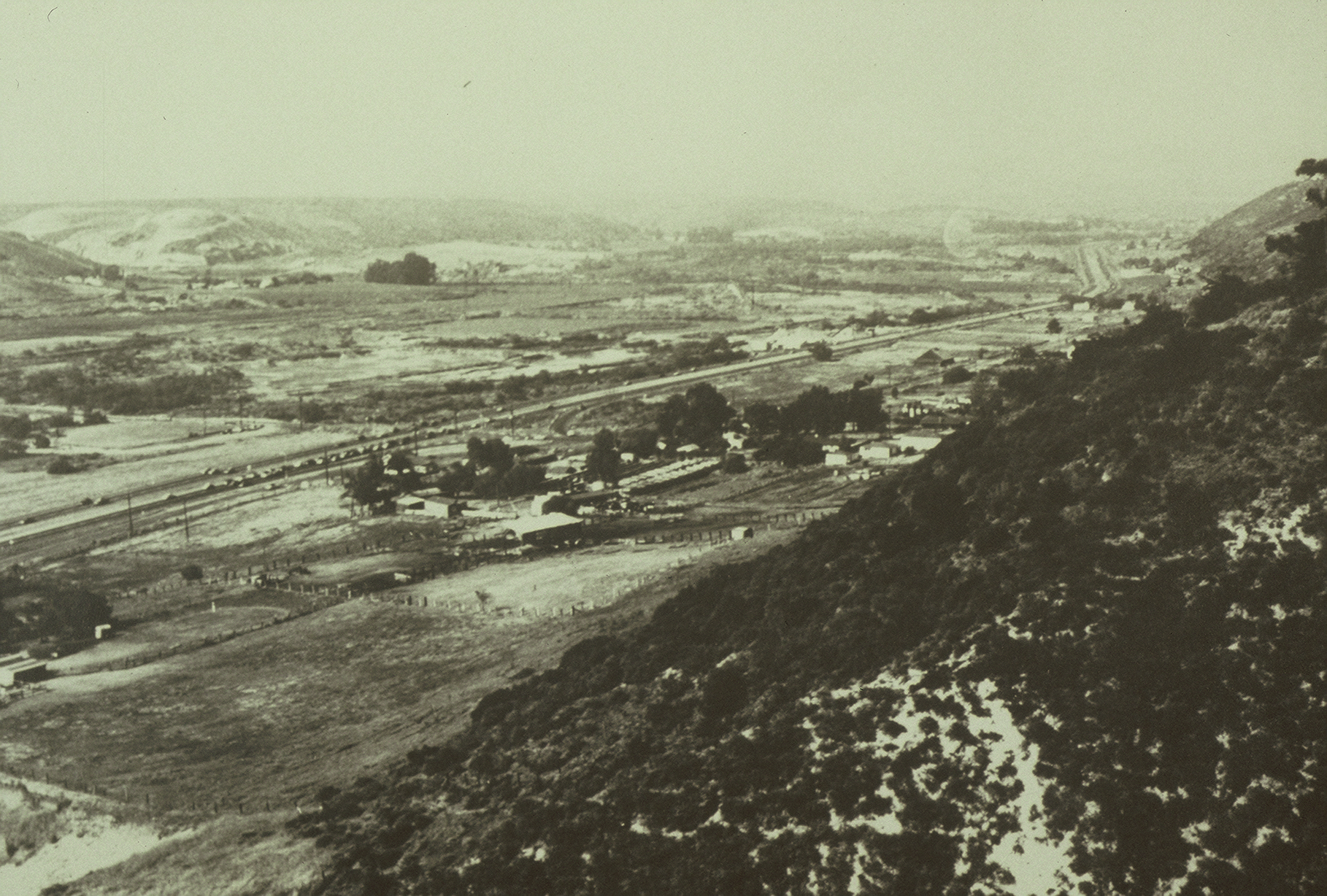 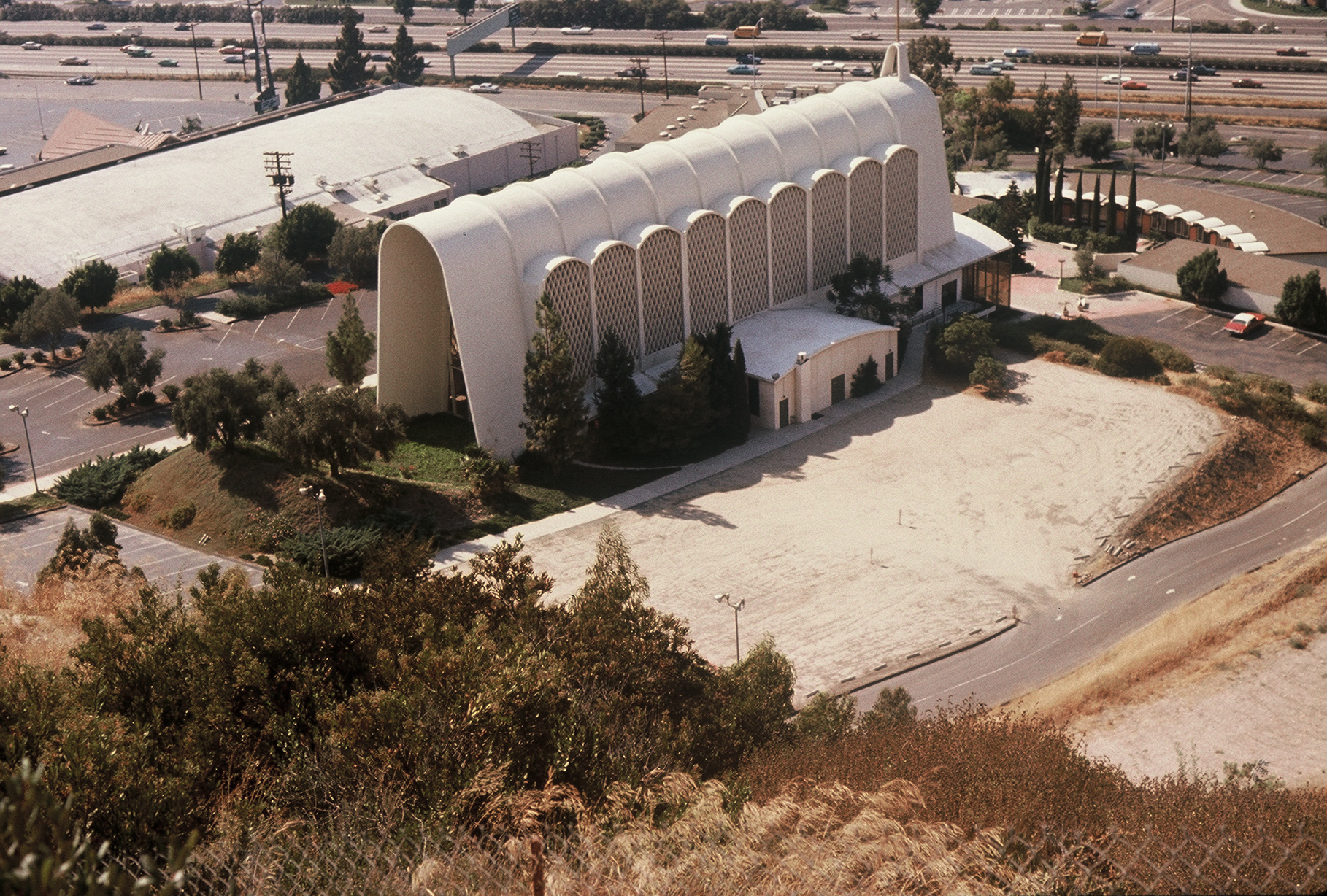 The new contemporary, Spanish cathedral-style church, was designed by Reginald Inwood and completed in 1964. The actual move from Ninth Street to the new site was completed by the congregation in two days in an endless caravan of cars and trucks.

The construction of the Sanctuary

The unique construction of the church used large sections made of precast concrete poured on-site, which were lifted and assembled into place. At the time, it was the biggest tilt-up job for precast concrete yet attempted on the west coast. 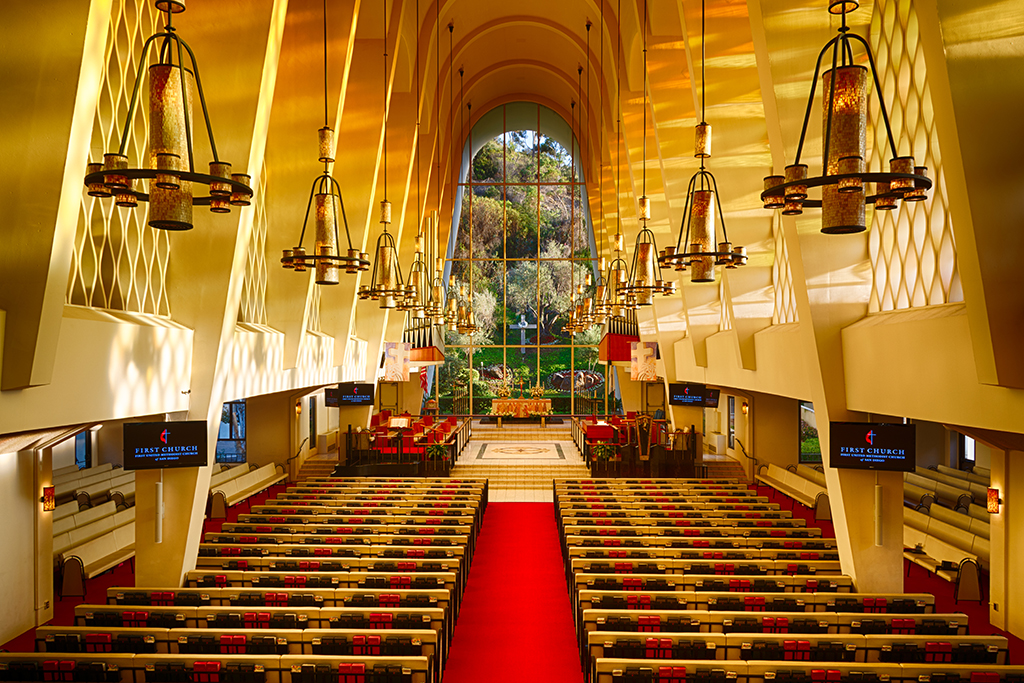 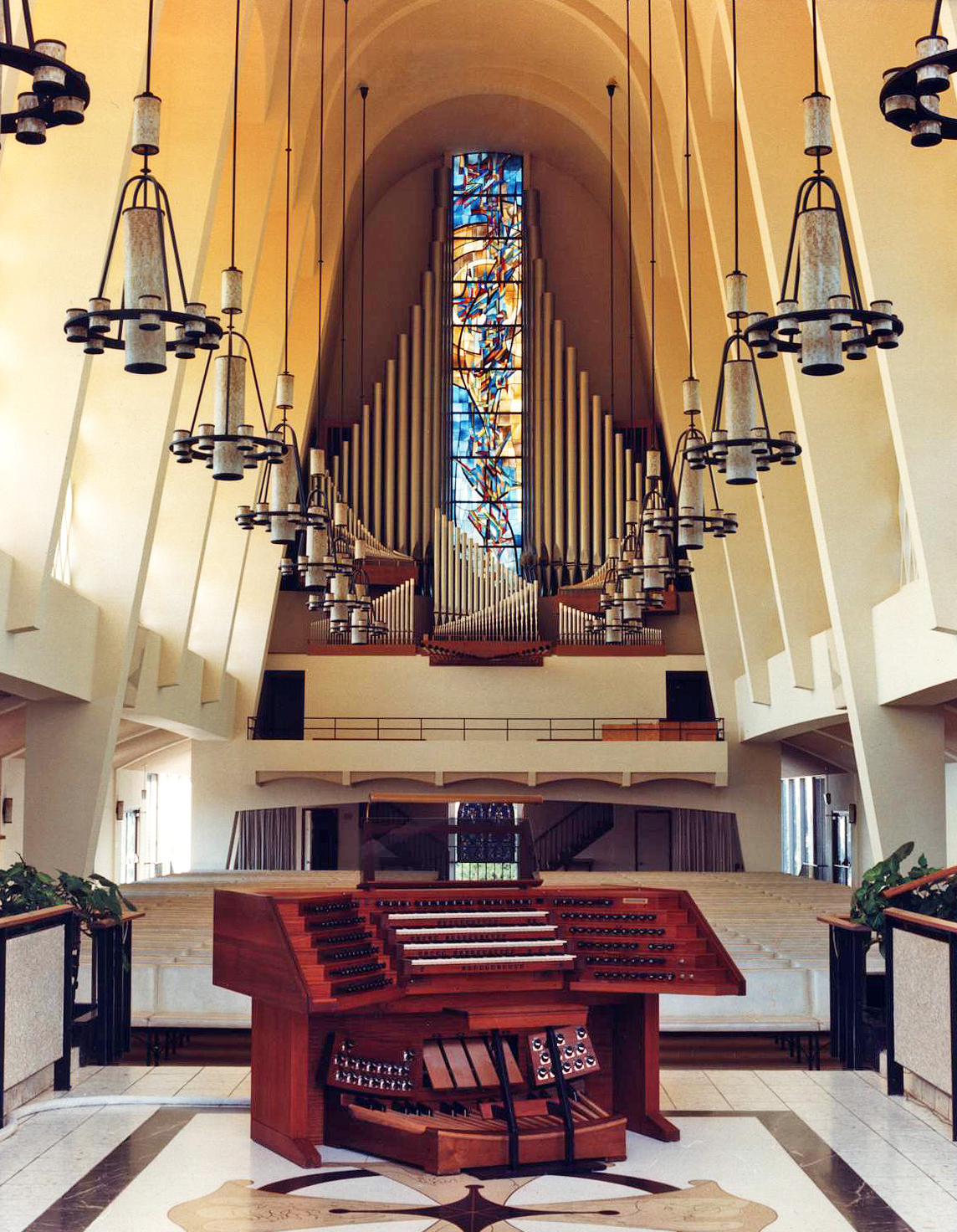 Every Sunday worshipers get to enjoy music played on the largest pipe organ in San Diego County. In 1988, the sanctuary pipe organ was completely rebuilt and enlarged by Lyle Blackinton & Assoc. 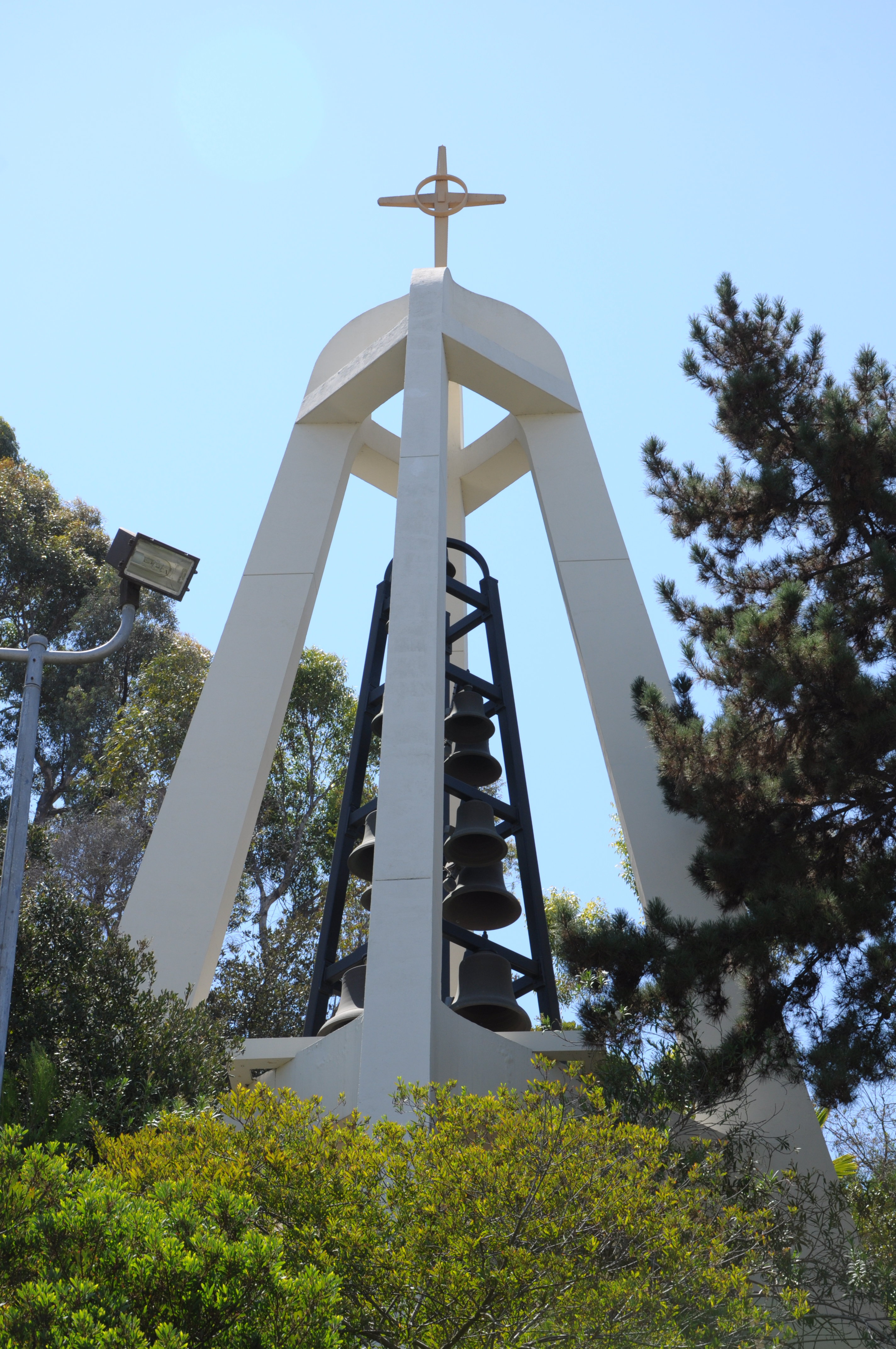 After being silent for 12 years, the 11 bronze bells played again at Fourth of July services in 1976, and the first Memorial Bell Tower was dedicated. In 1979, the bell tower was renovated and rededicated, along with the restored Hartupee bells from the Ninth & C Streets location. 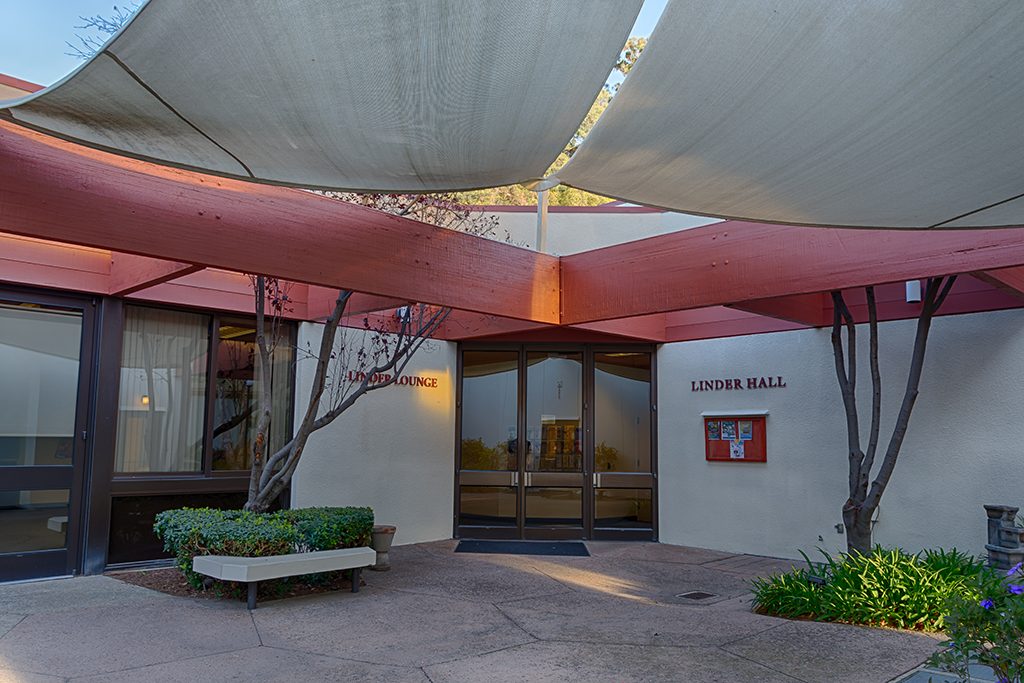 Linder Hall is the main fellowship hall that can seat 400 people. 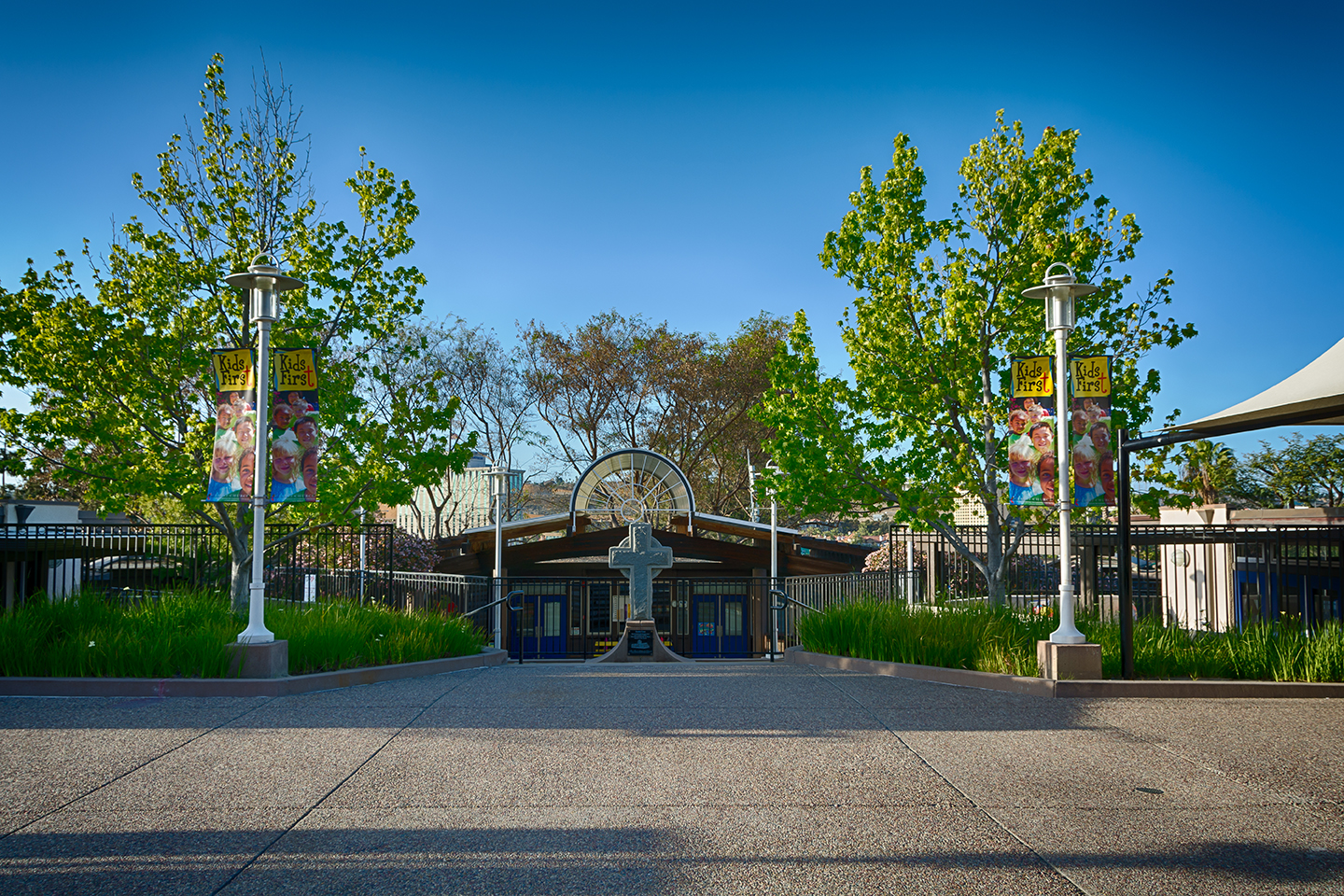 On Sept. 16, 1985, the Children's Growing Center (CGC) opened (with 10 children, ages two to five) in one classroom. The response to this new program was so great that an additional classroom was added in September 1986. The Children’s Growing Center expansion made it possible to serve 108 children, from infants through kindergarten.
More CGC history 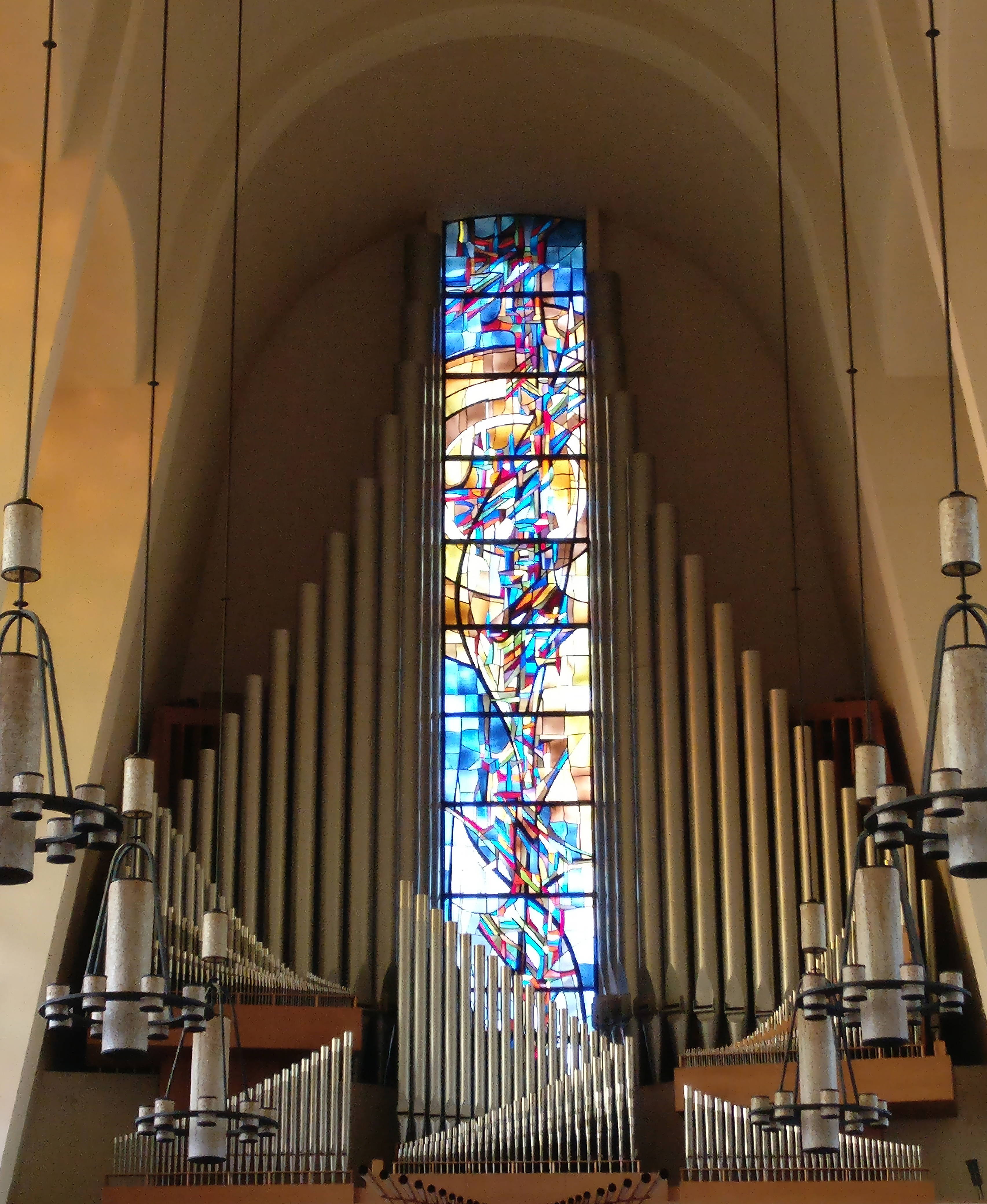 "The Tree of Life" stained glass window was installed 1988. It is located in the back of the sanctuary and measures 42 feet tall. At the same time, the sanctuary pipe organ was completely rebuilt. 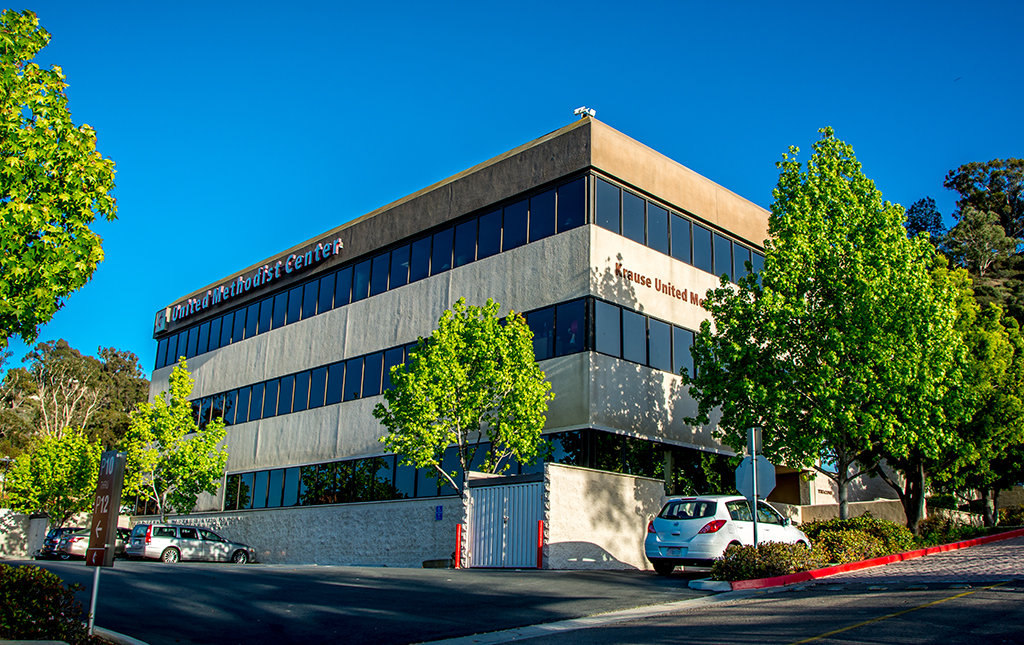 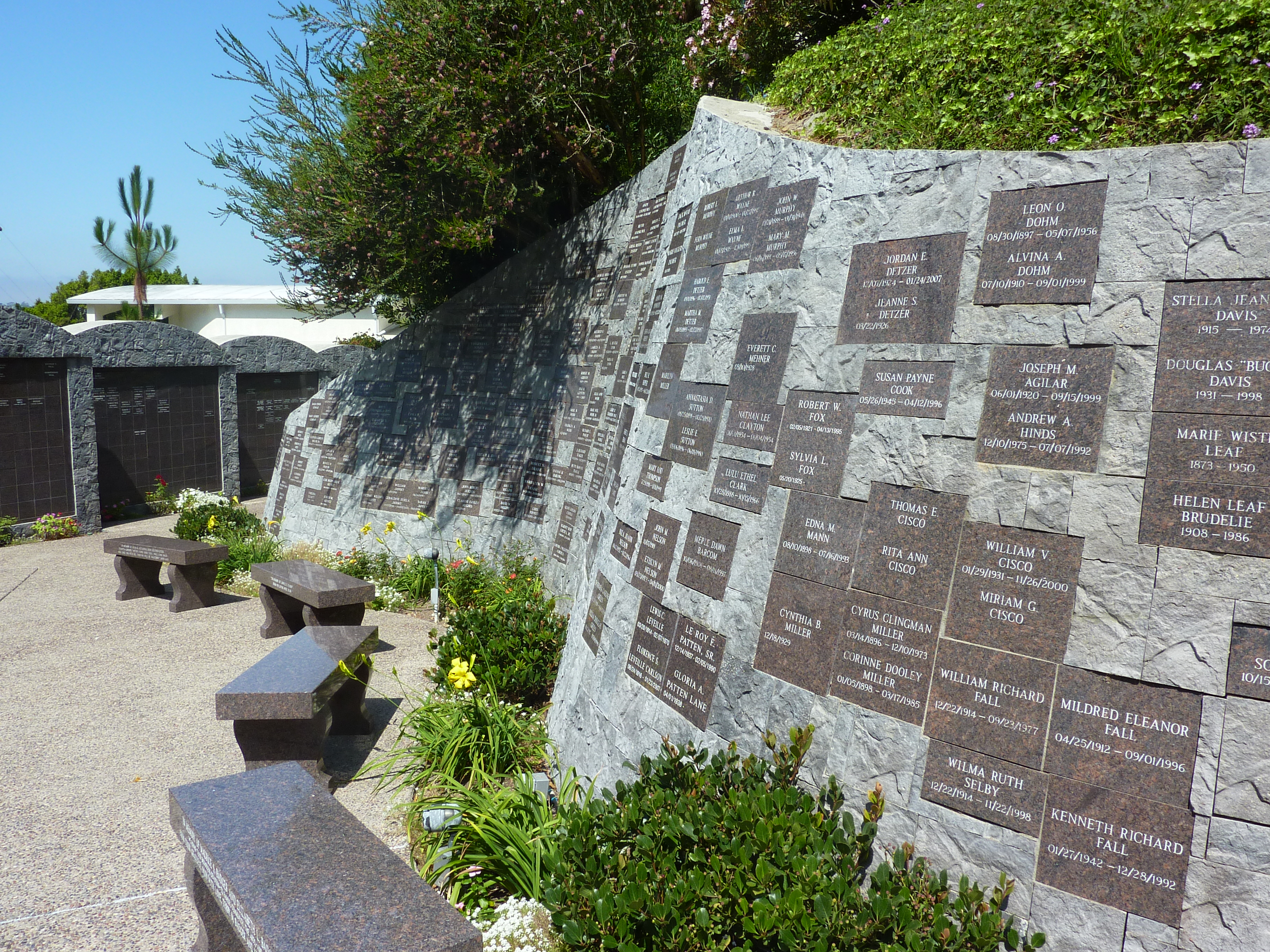 The Memorial Garden was dedicated 1998 and includes a columbarium with 1,080 niches, a memorial wall and a place for prayer and meditation. It is located immediately beyond the “Mount of Olives” – the landscaped hill behind the altar window. 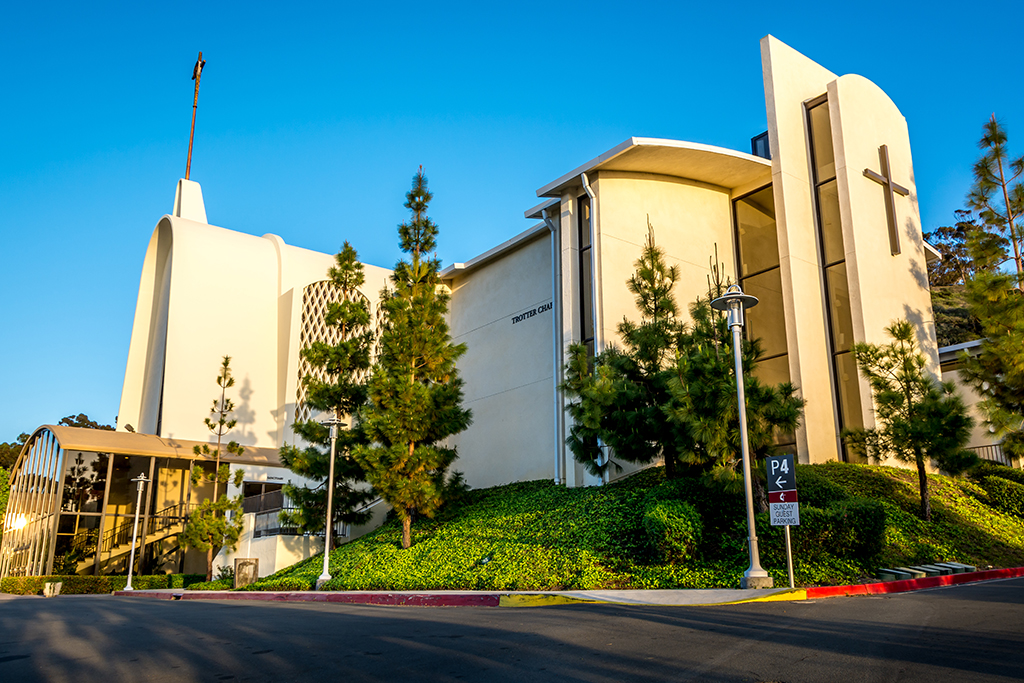 The Trotter Chapel. with seating for 100, and the Sutherland Family Music Center were consecrated in 2006. A two-manual, 14-rank, 849-pipe L. W. Blackinton and Associates Pipe Organ was installed in the Trotter Chapel and dedicated on September 12, 2010. 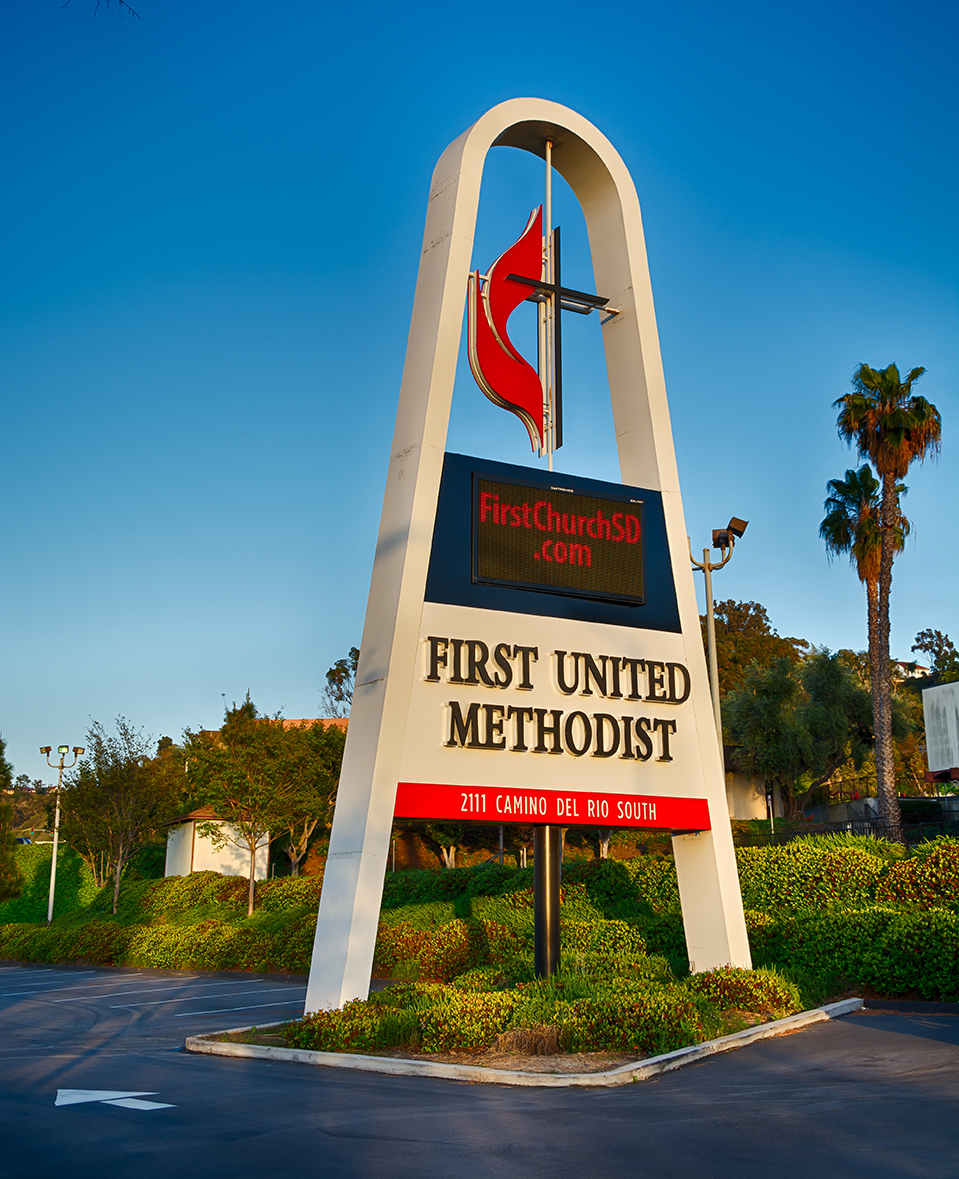 A new digitized marquee was installed in June of 2012. A brightly lit United Methodist "flame" and events can now be easily seen from 1-8. 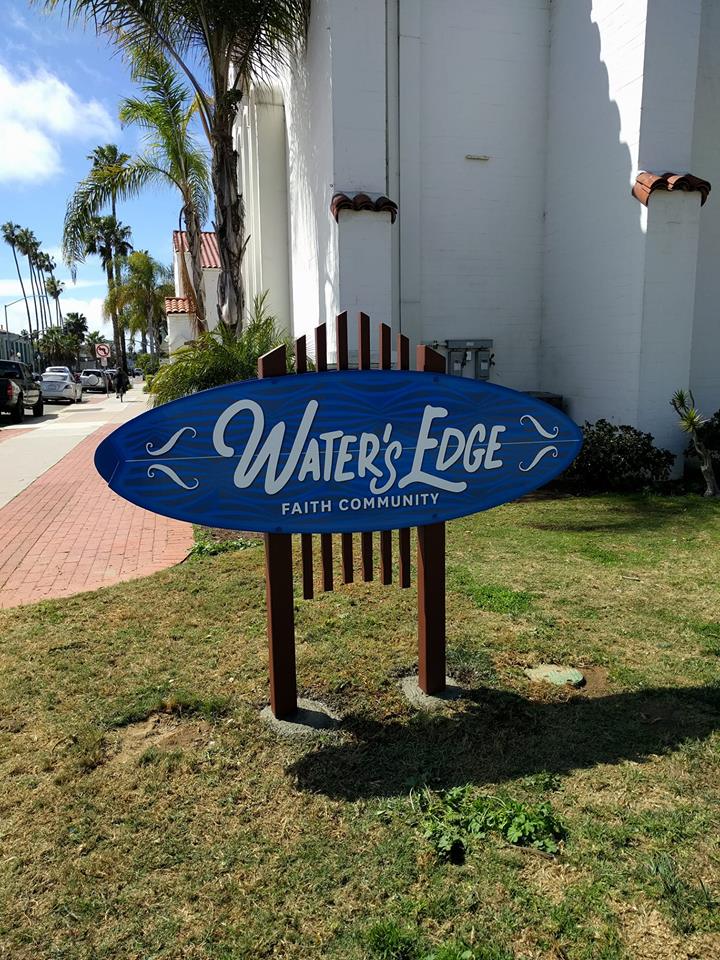 Point Loma UMC, located at 1984 Sunset Cliffs Blvd. in  Ocean Beach, merged with First Church in 2017. The Water's Edge Faith Community, who worshiped in the "Cove" on the Mission Valley campus as a contemporary service since 2002, moved to Ocean Beach to continue as a congregation of the First United Methodist Church of San Diego - One church - Two campuses. 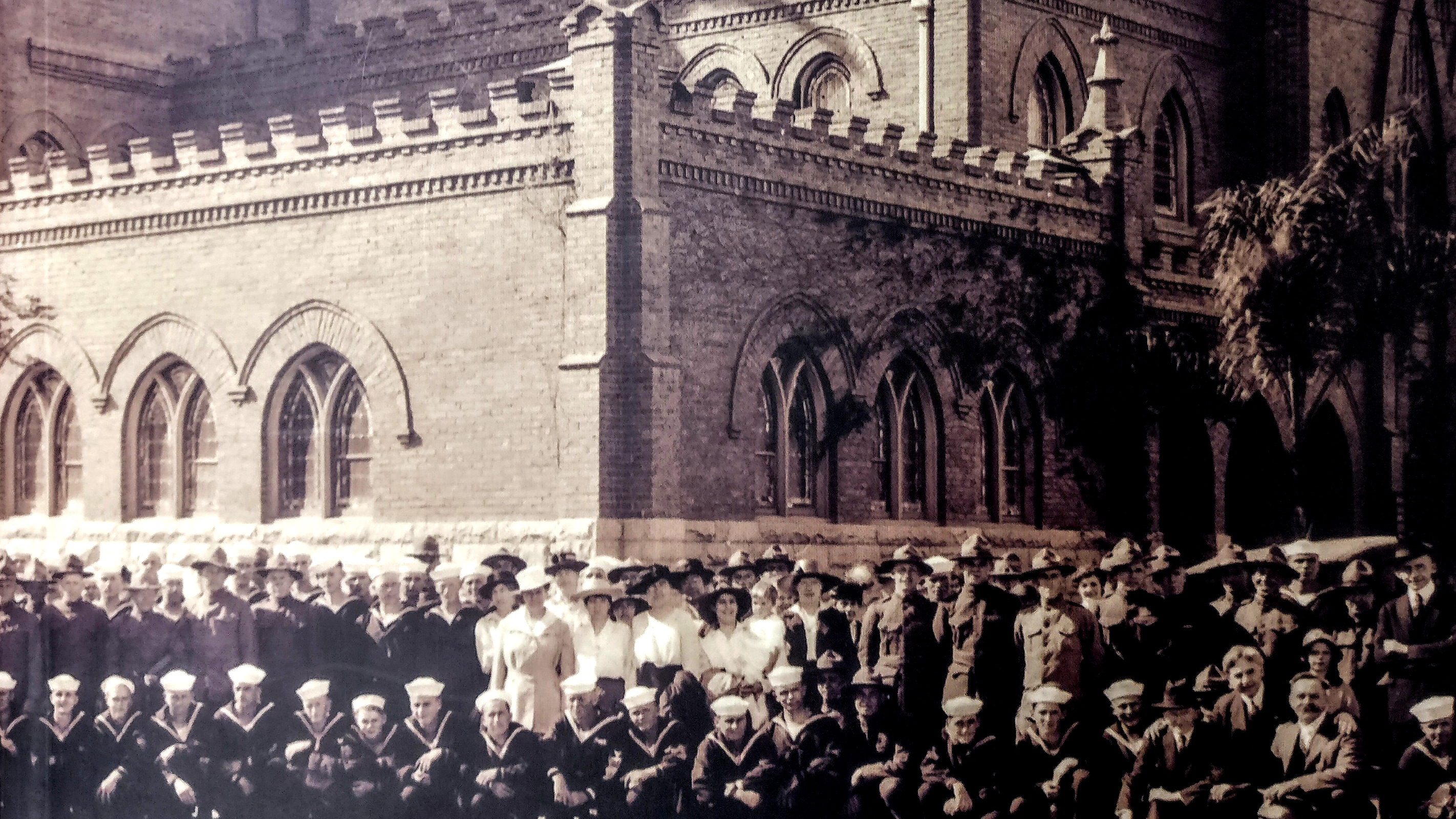